Monterey Car Week — still the most exclusive automotive event on the calendar — concluded Sunday with the 71st running of its pinnacle display, the Pebble Beach Concours d’Elegance.

But as antique Duesenbergs and Jaguars, backlit by the Pacific Ocean, rolled onto the famed course’s 18th fairway to vie for “Best of Show,” the Concept Lawn hosted on the terrace above felt like a land of make believe.

Futuristic EVs from Acura, Lincoln, Lucid, Polestar Rimac, DeLorean and other startups, dueled it out on the green.

More car companies are opting out of the traditional auto event circuit in Detroit, New York and the fourth-time cancelled Geneva shows and instead using the annual gathering in Northern California to bring media, well-heeled customers and their forthcoming models in one place.

This year, 19 companies hosted press conferences at The Quail, A Motorsports Gathering, the Friday prelude to the main event, making Monterey the place to glimpse where the industry is heading.

Here’s are some of the highlights: 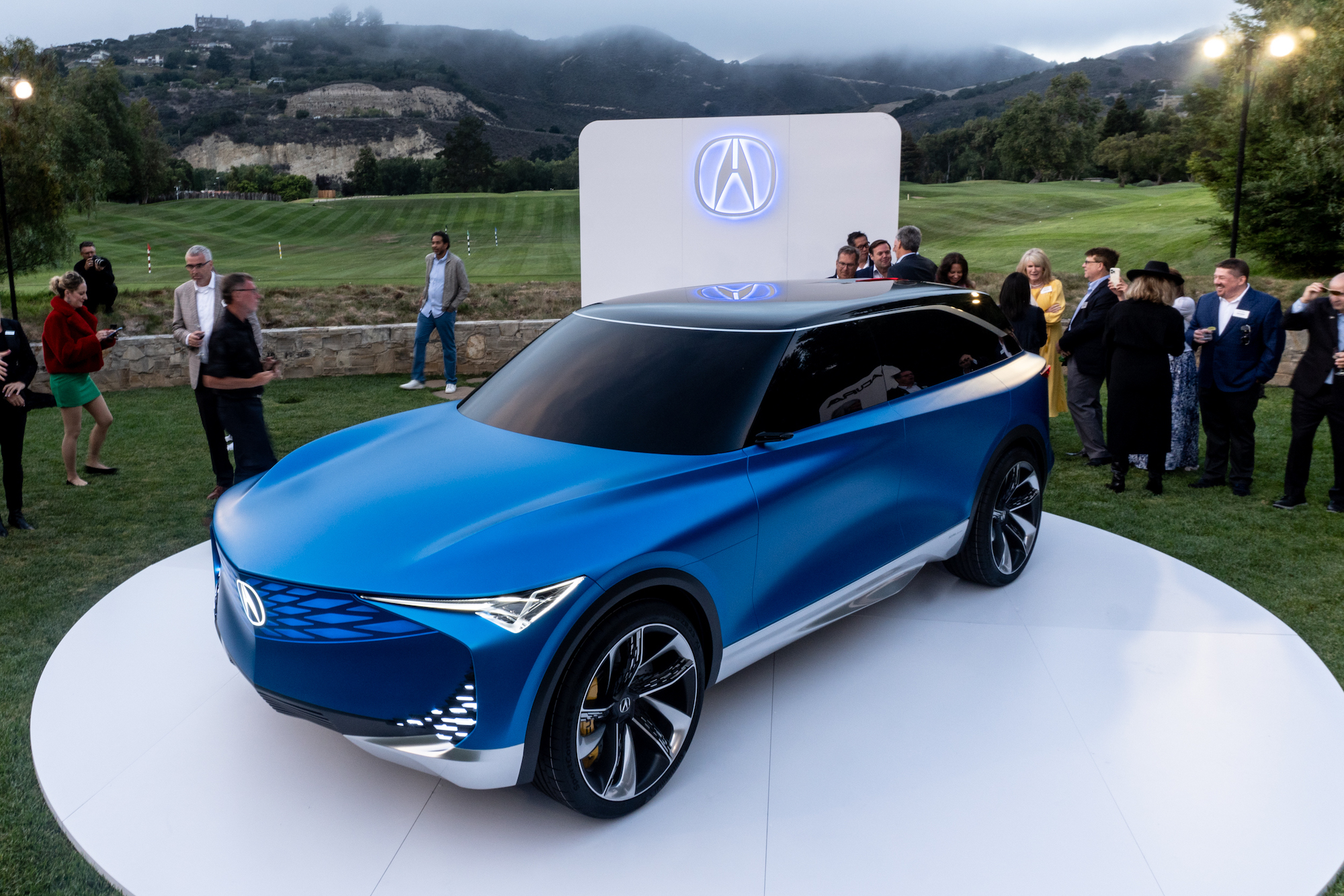 Acura revealed its vision for future EVs with the Acura Precision EV Concept, a sleek SUV inspired by luxury Italian boats and F1.

The design language of the Acura Precision EV Concept does give us a good glimpse of what to expect in 2024 when Acura begins building its production electric SUV.

Acura, the brand under Honda, also revealed that its future production EV — so the electric vehicle that will actually make it to market — will be called the ZDX (the Z stands for Zero Emissions). In addition to a regular version, Acura will release a Type S variant.

Notably, the first production EV from Acura will use GM’s Ultium platform beginning in 2026.

Aston Martin joined the electrified fray at Monterey Car Week with an updated version of its forthcoming Valhalla supercar, the brand’s first plug-in hybrid performance vehicle. Limited to 999 units, the mid-engine two-seater will feature significant infotainment upgrades and seating ergonomics inspired by the brand’s Formula 1 learnings when it reaches customers in 2024.

The Valhalla is a precursor to the brand’s first fully electric vehicle expected in 2025 as it strives to electrify its core portfolio by 2030. Executives said its 937-horsepower hybrid powertrain, which combines a twin-turbo V8 with two e-motors, is designed for racetrack-ready performance that can challenge any contender.

Audi brought to The Quail its trio of electric, autonomous “sphere” concepts for future metropolitan mobility. The Audi skysphere, grandsphere and urbansphere concepts represent the brand’s solution to traveling within congested megacities.

The urbansphere concept features a long wheelbase, 24-inch wheels and Audi’s largest ever interior, with a four plus two seating configuration. The private jet-like grandsphere concept showcases Audi’s vision for the executive sedan of the future. The smallest of the three is the skysphere roadster concept, a self-driving grand tourer with a retractable steering wheel.

The brand announced on Friday a fourth concept, the “activesphere,” set to debut early next year. 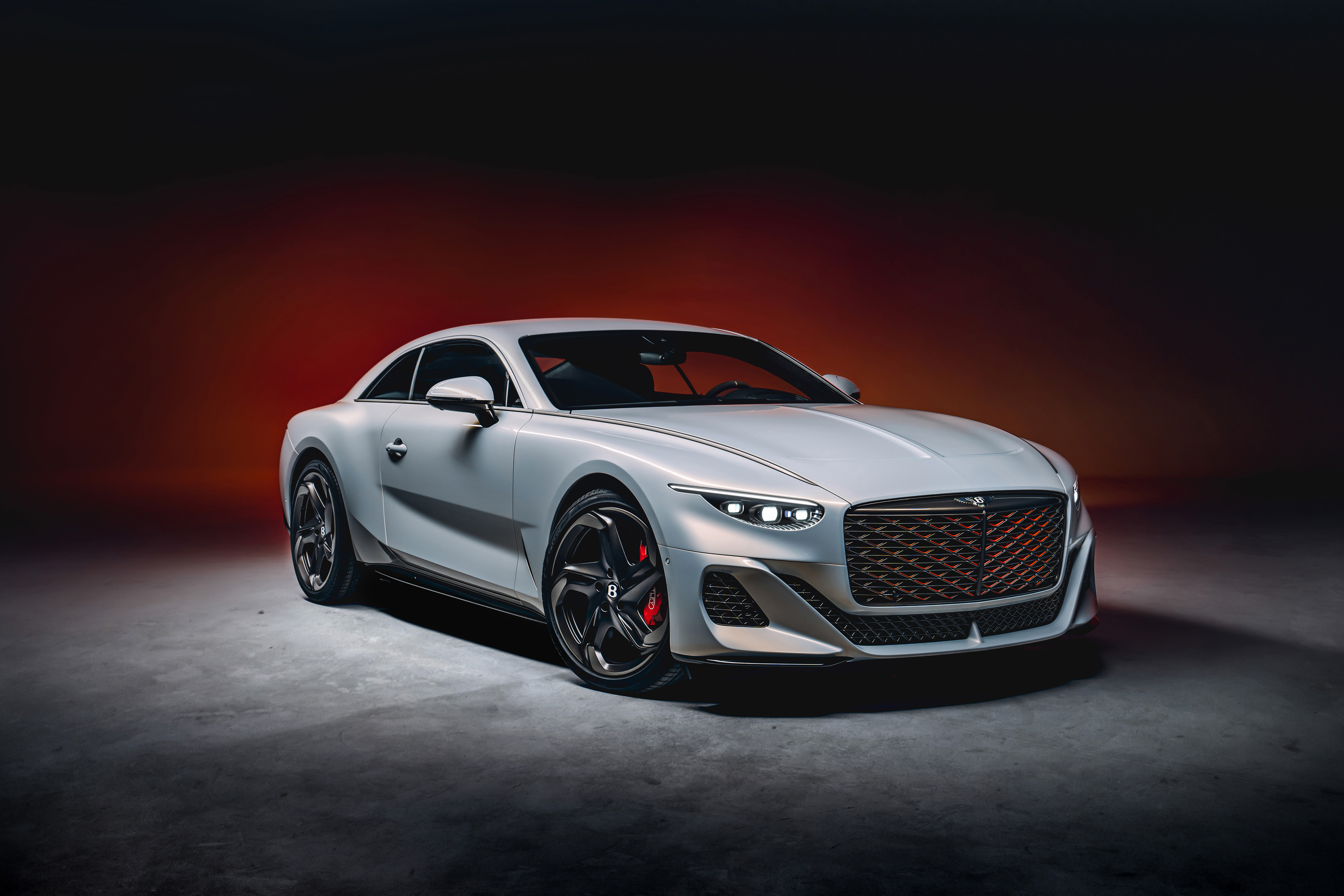 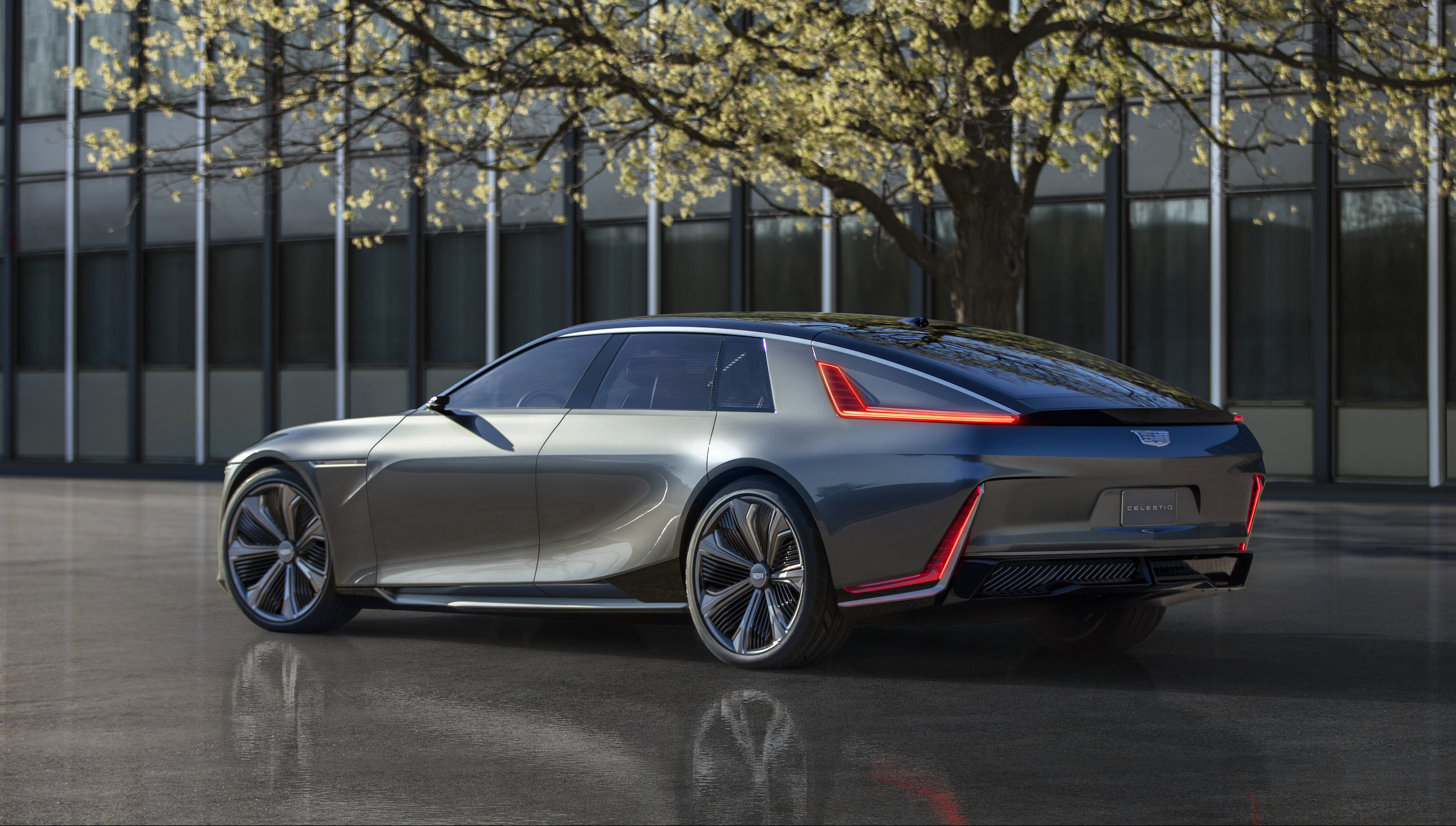 Cadillac revealed a prototype of the eagerly-anticipated Celestiq, the $300,000 halo car designed to take on the Tesla Model X Plaid, as well as other high-performance all-electric variants such as the Lucid Air Dream Edition and Porsche Taycan Turbo S. The brand hasn’t provided details on its battery range or performance but showed an interior featuring four red leather-upholstered seats resembling gaming chairs and several high-definition screens.

Built by hand, the Celestiq is scheduled to enter production late next year and go on sale in 2025. Cadillac said the sedan will offer Ultra Cruise, General Motors’ latest hands-free driver assistance technology. 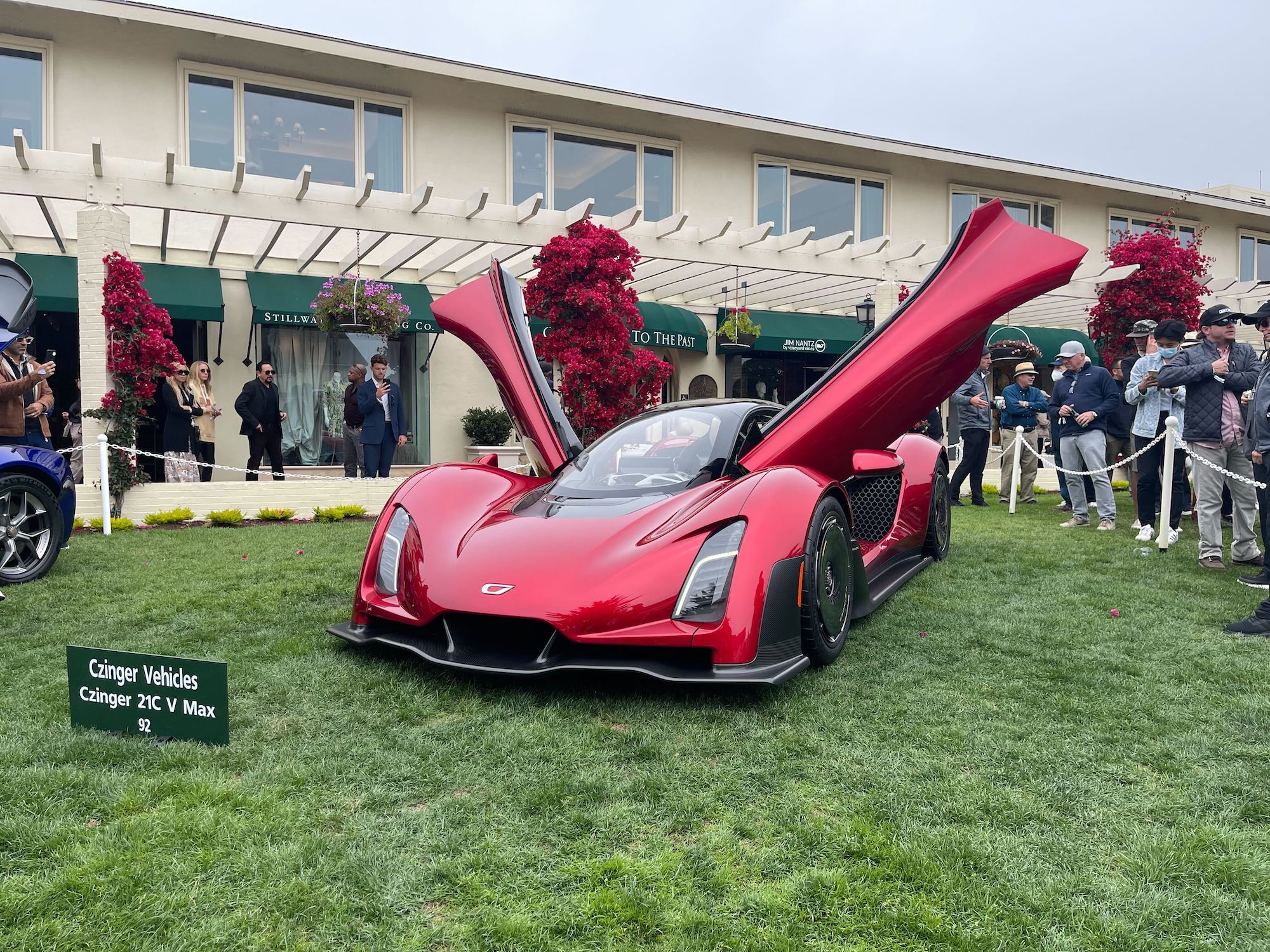 Czinger Vehicles revealed the 21C V Max, the second body style of the startup’s first 3D printed production hypercar. The vehicle is equipped with a hybrid powertrain that features a 2.88 liter, twin turbo V8 that delivers a combined output of 932kW (1,250hp).

Czinger also showed off the next vehicle that may join its portfolio, a coupe with gullwing doors called the Hyper GT. 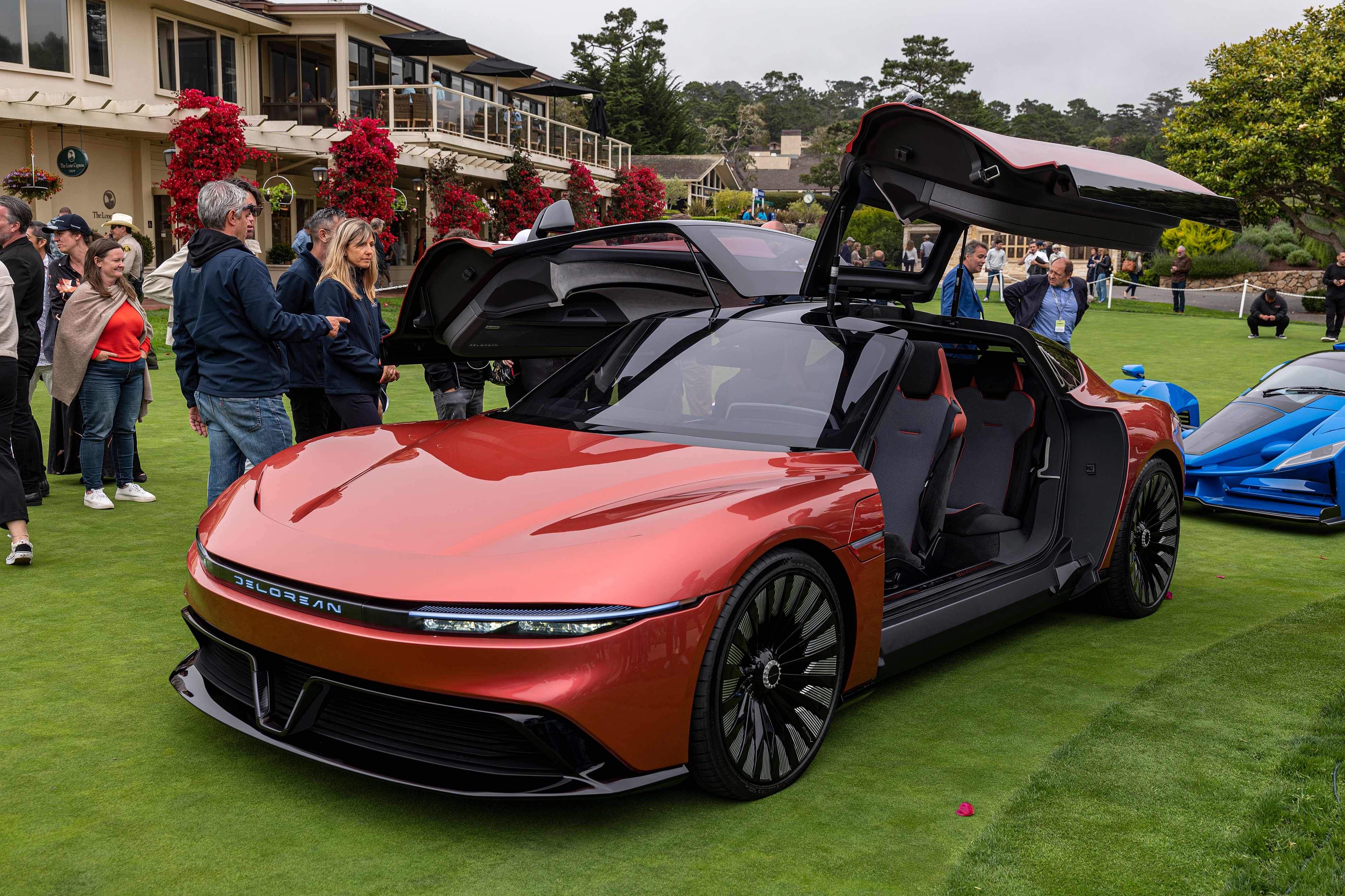 The DeLorean Alpha5 also attracted throngs of onlookers to the Concept Lawn at the Lodge at Pebble Beach. Sleeker than the gull-winged coupe featured in the “Back to the Future” trilogy, the Alpha 5 represents the brand’s intentions for a battery-electric revival under new ownership. The curvy red car no doubt appealed to a sense of nostalgia among a crowd who came of age watching the trilogy in theatres.

The Texas restorer who bought the rights to the brand said that the all-wheel-drive four-seater, expected to go on sale in 2024, will cruise from 0 to 60 mph in less than three seconds and reach a top speed of 155. 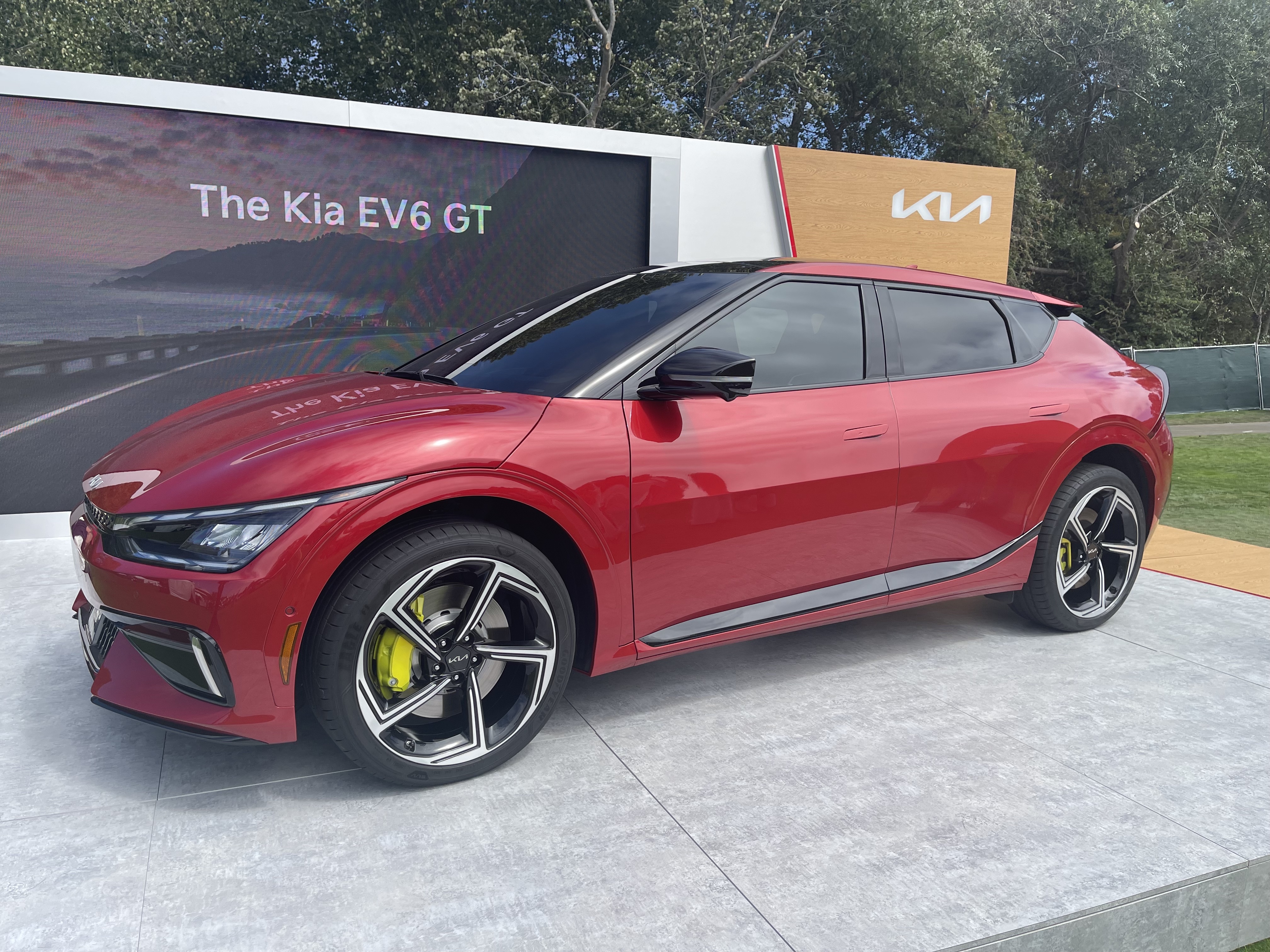 Kia used Monterey Car Week to show off a new powerful version of its new EV6 vehicle. The EV6 GT — not to be confused with its existing GT-Line trim — is a dual-motor performance crossover aimed at consumers who simply want a more than a zippy EV.

The all-wheel drive powertrain with a front-mounted 160kW motor and a rear-mounted 270kW motor produce a combined power output of 430 kW (or 576 hp) and 546 pound-feet of torque.

The EV6 GT is outfitted with 21-inch wheels and has a dedicated sport suspension with electronically controlled dampers and front suspension performance components. There’s even drift mode, which allows drivers to distribute power to the rear wheels. Two additional sounds unique to the EV6 GT join the roster of customizable “Active Sound Design options.”

The EV6 GT will go on sale in the fourth quarter of 2022 and like all EV6 vehicles it is part of the Kia “Plan S” strategy to launch at least two battery-electric vehicles (BEV) per year and build a full line-up of 14 BEVs by 2027. 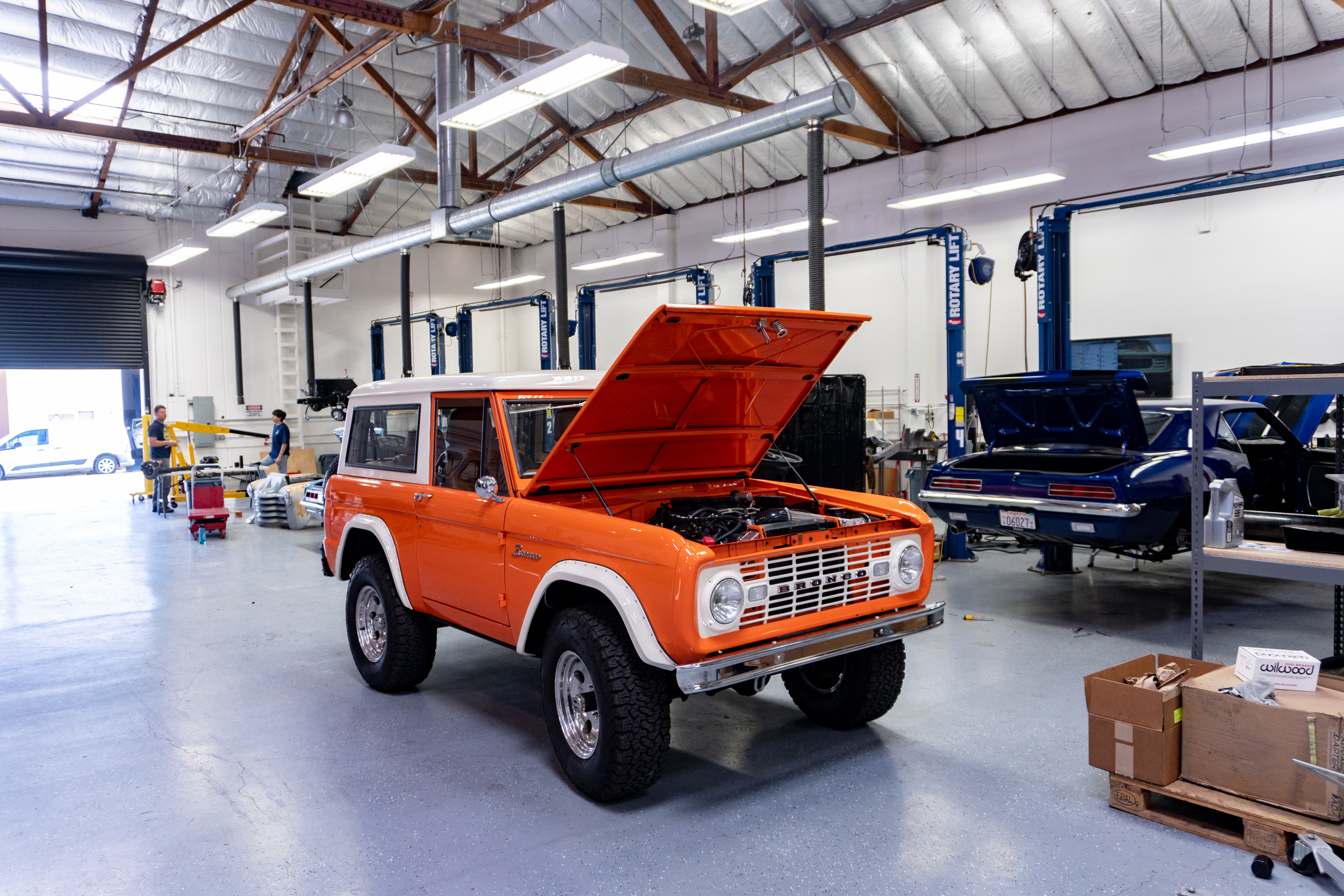 Kindred Motorworks, a new restomod startup based in Northern California that takes sought-after old vehicles and infuses them with new powertrains, safety features and other modern-day touches, made its public debut at Monterey Car Week.

So far, the company has three vehicles that it will be offering to customers: a Volkswagen microbus that starts at $199,000, a vintage Ford Bronco, which is available with either a V8 or electric powertrain and starts at $169,000, as well as the late 1960s Camaro, which is also available with a V8 or electric powertrain. The Camaro will start at $149,00 for the LS and $199,000 for the LT.

The Northern California-based startup has raised more than $20 million through its first two funding rounds. It raised $5 million at the end of 2020 and another $15.6 million at the end of 2021. It has attracted a number of high-profile investors, including Hagerty, a company known for vintage vehicles and one of the country’s largest insurance providers for those vehicles, and Robert Downey, Jr’s Footprint Coalition. Other backers include CPMG, Goldcrest and Fifth Down Capital.

Those funds will support the company as it works towards full production in 2024. 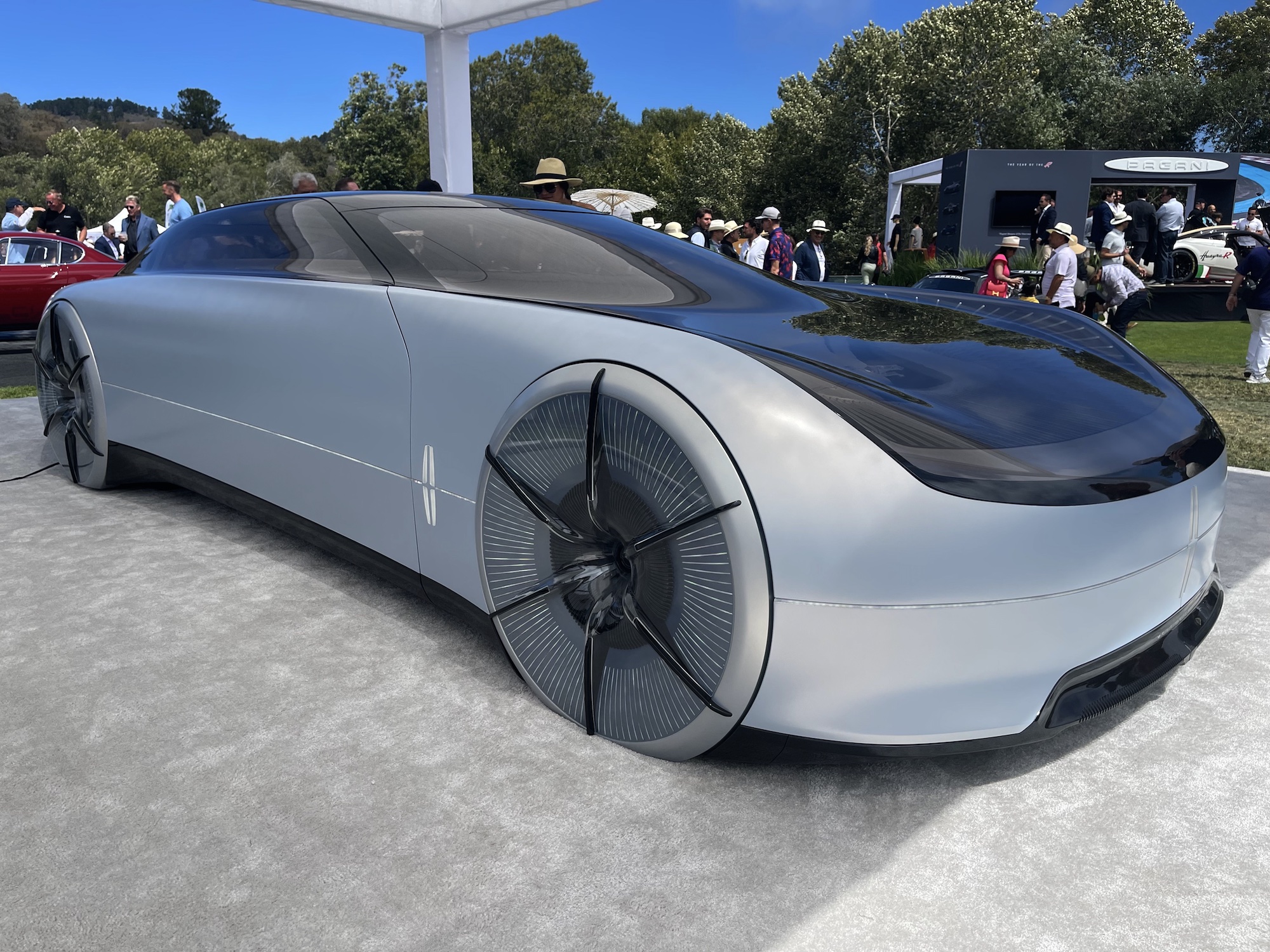 Some of the largest crowds flocked to the Lincoln Model L 100 concept, an autonomous, battery-electric grand tourer that pays homage to the brand’s first luxury vehicle, the 1922 Model L. Mammoth, 14-foot, reverse-hinged doors swung open to reveal a chessboard-motif center console controlled by a crystal chess piece in lieu of a steering wheel, a dashboard that disappears in autonomous mode, and couch-like seating for five passengers. A digital floor furnished the discomfiting sensation of stepping onto a computer screen.

The Model L 100 is not headed for production but serves as an emblem of Lincoln’s long-term vision for its electric vehicle lineup. 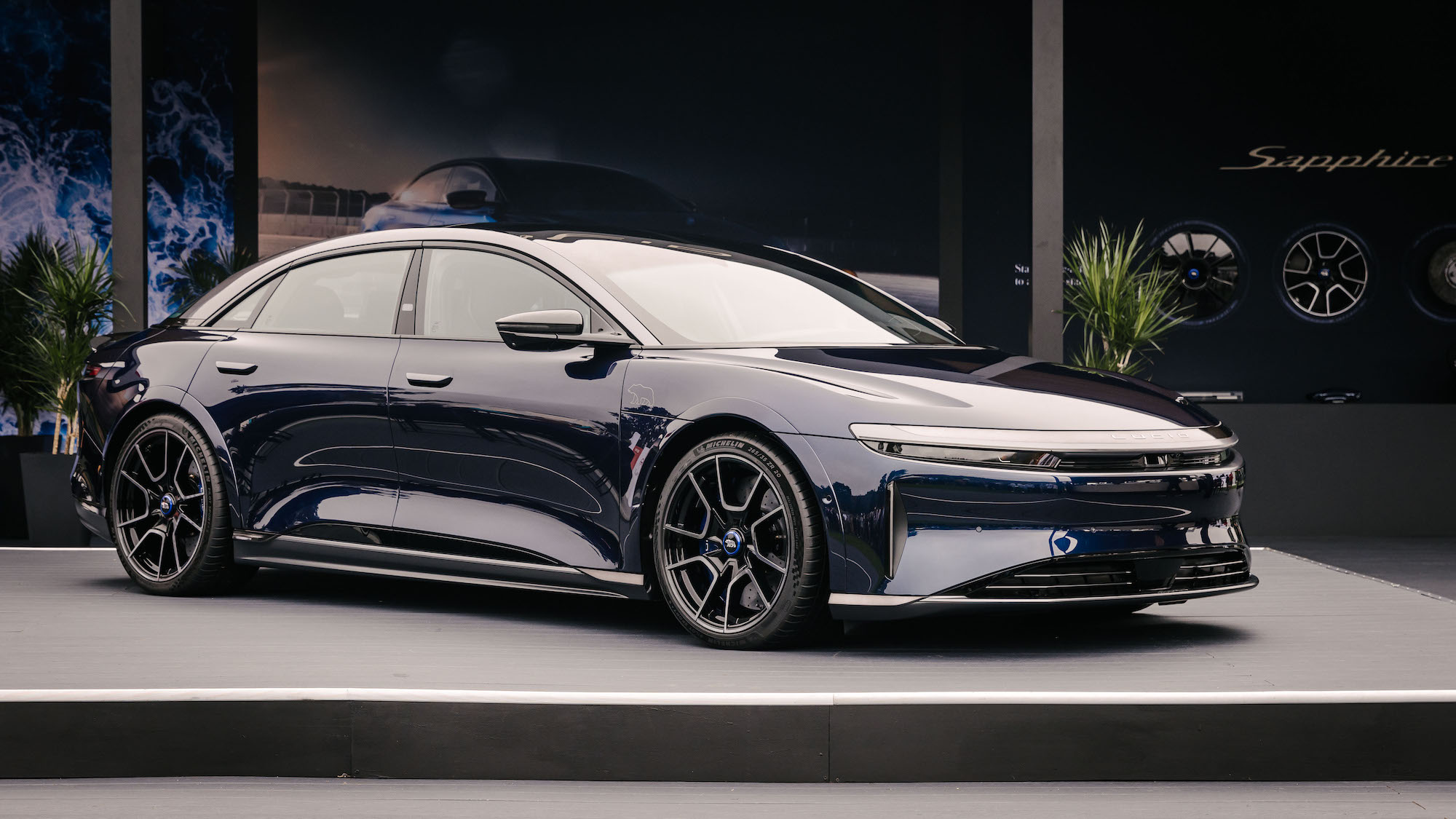 As part of the public debut, the Lucid Air sedan got the Sapphire treatment. This new Lucid Sapphire Air is more than just a new paint color, interior theme with highly bolstered 18-way power sport seats upholstered in black leather and a Sapphire-themed on-screen display — although those are all in the new EV that is priced at $249,000 (excluding taxes and destination fees).

The big notable improvement is a three-motor powertrain with a new twin motor rear-drive unit and a single motor front-drive unit that boosts all-around performance.

Deliveries of the new Lucid Air Sapphire EV sedan are expected to begin next year for customers in the U.S. and Canada. 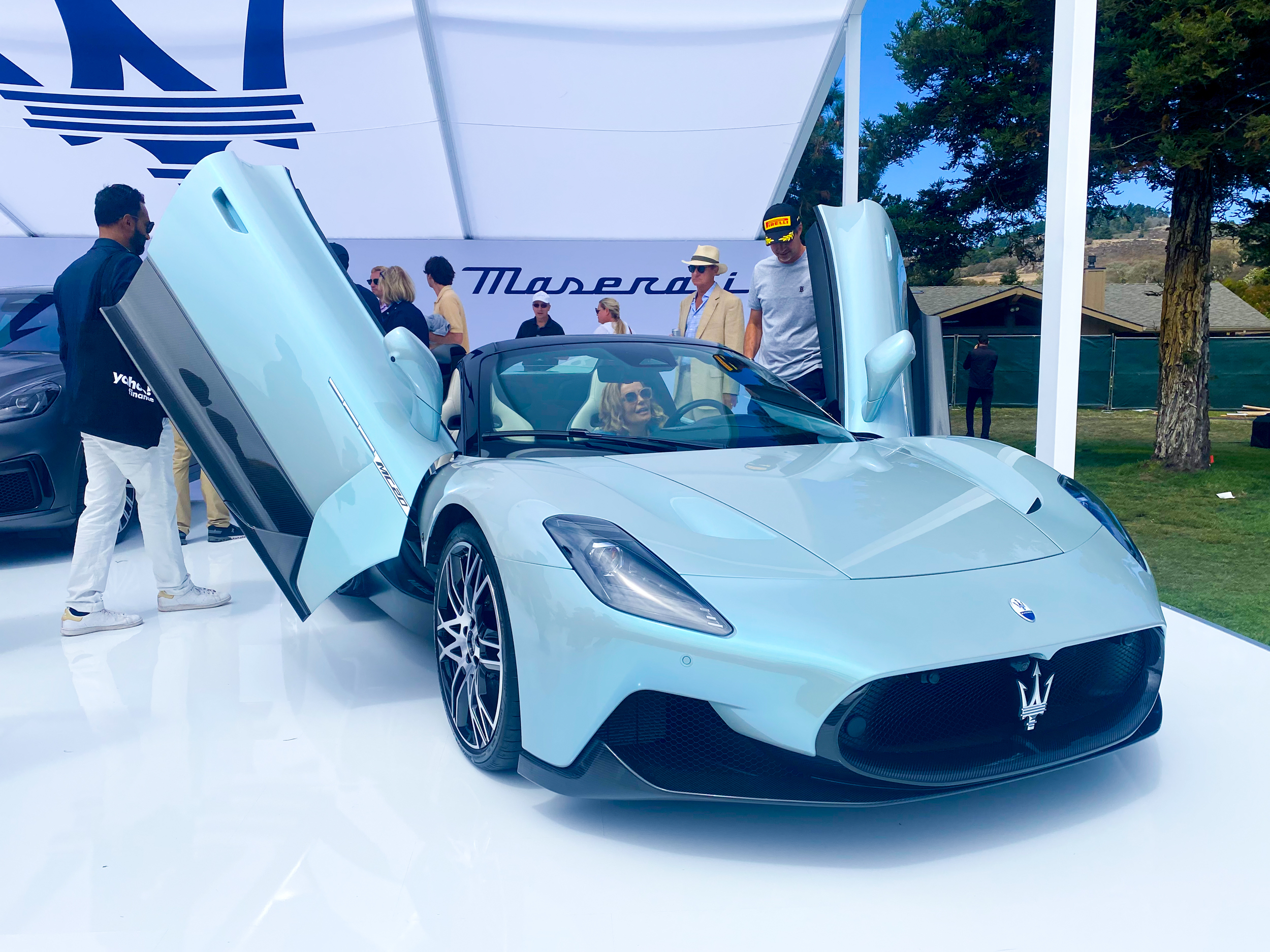 Maserati is known for its beautiful Italian vehicles. The future though is a bit tougher to navigate for those hoping to get by on looks alone. Fortunately, thanks to an influx of investment from the Stellantis merger of Fiat Chrysler Automobiles and the French PSA Group, Maserati has the money and vehicles needed to not just survive, but also potentially thrive over the next decade.

Maserati Americas CEO Bill Peffer told TechCrunch at this year’s Quail Automotive Gathering, that last year was about getting the business in order.

This year, they’ve invested in R&D and plan to introduce three new models (which will double their lineup) over the next 18 months. The latest vehicles from the automaker are outfitted with their own engines (previously they were using Ferrari powerplants) and are part of an architecture that supports both gas and electric powertrains.

“We’re excited to introduce the internal combustion engine variants quickly,” Peffer said and noted that the fully electric variants will follow closely behind. 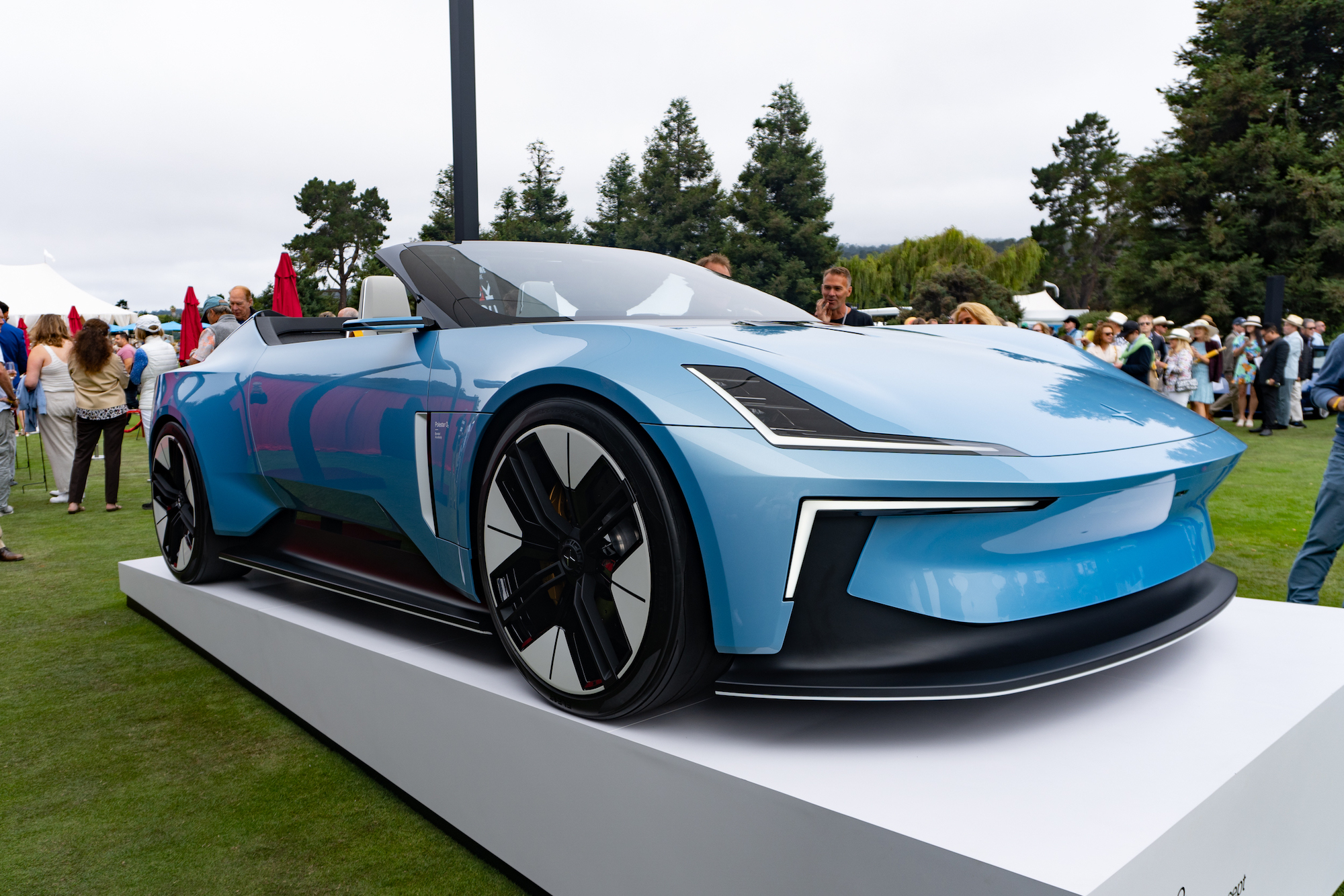 The big news with Polestar was the announcement that it will expand its lineup to include a 884-horsepower hard-top convertible with recycled polyester upholstery.

The Polestar 6 electric performance roadster will go into production in 2026 based on the Polestar O₂ Concept the company revealed in March. Customers can now begin reserving build slots online.

Contributor Roberto Baldwin talked with Polestar CEO Thomas Ingenlath on the sidelines of Quail, the motorsports gathering during Monterey Car Week, and he had some interesting views on how the company can provide value to customers even when their EV is parked. 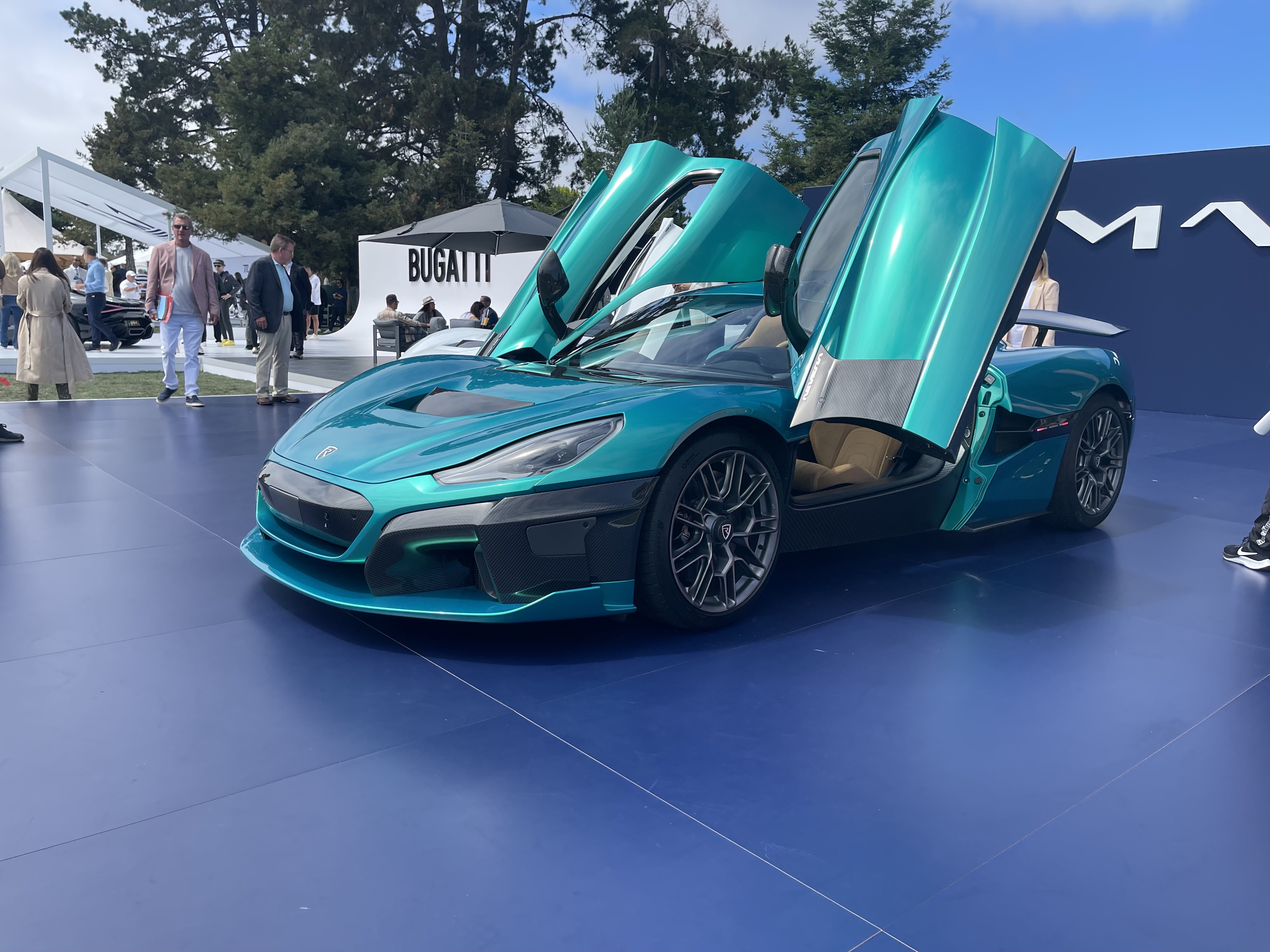 Rimac brought to The Quail the production version of its $2.5 million Nevera electric hypercar, a curvy, 1,914-horsepower grand tourer hand-built built in Croatia. Rimac said the Nevera can accelerate from zero to 60 mph in 1.85 seconds — faster than any other production car — and that its 50-unit first-year production run is sold out.

Mudge’s report helps Musk’s legal fight over $44B Twitter deal; says there are ‘millions’ of accounts that could be spam bots