SwipeRx, a platform for pharma professionals, said Tuesday it has secured a $27 million Series B round led by Indonesia’s MDI Ventures, with participation from the Gates Foundation, Johnson & Johnson Impact Ventures, Susquehanna International Group and existing backers.

Pharmacies in Southeast Asia were largely fragmented, mom-and-pop shops operating in silos when the company — originally known as mClinica — was incorporated in Singapore in 2014. The region had seen “lots of innovation for patients through a proliferation of telemedicine apps and even innovations for doctors, but the pharmacy and its workforce were largely unaddressed,”  SwipeRx CEO Farouk Meralli said.

Today, he claims, SwipeRx has transformed and digitized the pharmacy industry and become a one-stop platform for pharmacists to perform all their daily tasks, from education to purchasing to inventory financing in Southeast Asia.

On the education front, he says the outfit provides online accredited education, drug information, job listings, discussions boards and everything else its community of pharmacists need to advance professionally and better serve patients.

Toward that end, the SwipeRx app allows users to keep up to date with the latest healthcare news and drug information and access free educational continuing professional development (CPD) modules, which are mandatory in many Southeast Asian countries. (Meralli insists that SwipeRx is now the largest regional provider of online accredited education for pharmacy professionals, in fact.)

The app also helps pharmacists search for new job opportunities or to post job offers. Like LinkedIn, the app also invites users who aren’t necessarily on the cusp of changing jobs to expand their network by connecting to their pharmacy peers. Meralli told TechCrunch it is easiest to think of SwipeRx as a LinkedIn meets Amazon for pharmacies.

Of its purchasing power, Meralli said that by forming singular purchasing network — one with scale — the company has been able negotiate better prices, as well as launching B2B commerce in the same app. SwipeRX’s community-driven commerce model enables small pharmacies in particular to benefit from the power of that broad network by access the best prices and better ensuring that medicines are available to them and their patients, he said.

According to the company, SwipeRX will use the fresh capital to scale its growth across Southeast Asia, expand its logistics network for B2B e-commerce and increase its team.

Certainly, SwipeRx —  which raised $6.3 million in Series A funding in 2017 — has the kind of momentum that investors like.

The 400-person organization claims that more than 235,000 pharmacy professionals and 45,000 pharmacies use the app in Southeast Asia, including Indonesia, Singapore, the Philippines, Vietnam, Malaysia, Thailand and Cambodia.

It also says that more than 8000 retail pharmacies in Indonesia alone — accounting for about 25% of all pharmacies —  are on SwipeRx, with over 5,000 users joining its digital purchasing network and transacting on its B2B platform. 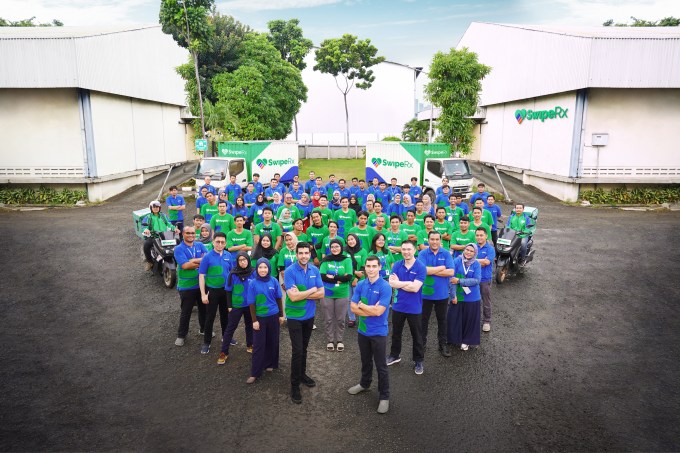 “Our growth as a company has been exponential, and the past years have allowed us to further our vision to build the largest pharmacy network in the region,” Meralli told TechCrunch. “This round of funding reaffirms our commitment to disrupt this deeply fragmented industry while improving public health by supporting the pharmacy channel.”

Added Donald Wihardja, CEO of MDI Ventures: “We see great potential and promise in SwipeRx’s platform as it strives to address the challenges faced by pharmacies, especially in Indonesia, by connecting different players – big and small – all under one platform.”

Walmart is adding Symbotic robots to warehouses across the country